Growth in developing East Asia and the Pacific (EAP) is projected to soften, while growth rate in Thailand is expected to be slightly lower in 2019

Growth in developing East Asia and the Pacific (EAP) is projected to soften to 6.0 percent in 2019 and 2020, down from 6.3 percent in 2018, largely reflecting global headwinds and a continued gradual policy-guided slowdown in China, according to the latest edition of the semiannual East Asia and Pacific Economic Update, Managing Headwinds.

While trade policy uncertainty has abated somewhat, global trade growth is likely to moderate further, according to Managing Headwinds, the April 2019 edition of the World Bank East Asia and Pacific Economic Update.

Domestic demand has remained strong in much of the region, the report adds, partly offsetting the impact of slowing exports.

Strong domestic demand in Thailand helped offset a slowdown in exports and helped the economy expand by 4.1 percent compared with 3.9 percent in 2017.

Private consumption in Thailand grew at its fastest pace in almost six years on the back of a supportive low-inflation and low-unemployment environment as well as the expiration of the holding period for cars purchased in the first-car tax rebate program.

Citing the East Asia and Pacific Update report, the World Bank’s senior economist for Thailand, Mr. Kiatpong Ariyapratya, said that the Word Bank also projects that Thailand’s growth rate for next year would remain at 3.8%. 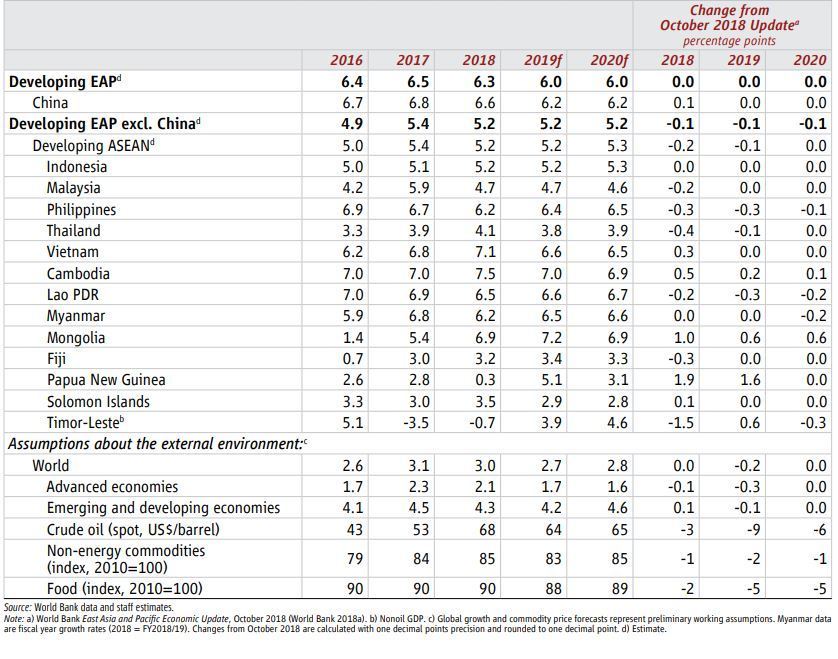 Thailand’s current account surplus narrowed due to a reduction in services exports caused by fewer tourists from China (after a boating accident affected confidence) and a reduction in automotive parts exports to China due to the trade dispute between the United States and China.

“The region’s resilient growth should bring about further poverty reduction, already at historic lows. By 2021, in fact, we expect extreme poverty to dip below 3 percent,”

At the same time, however, half a billion people in the region remain economically insecure, at risk of falling back into poverty— an important reminder of the scale of the challenges facing policymakers.

Although Thailand’s growth projection is lower than the average 4%-5% rate for the rest of ASEAN, Mr. Kiatpong said that Thailand’s economic growth trend was improving compared to the situation 2-3 years ago