Though the Finance Ministry is worried about the fast rising baht, the central bank assures that the baht is only strengthening in line with regional currencies.

Finance Minister Uttama Savanayana said on Thursday (June 11) that the Bank of Thailand understands that the currency exchange rate is necessary to support economic recovery.

“The central bank knows that the baht exchange rate should move in line with the Finance Ministry’s and government economic plan for recovery, and that it is responsible for the range of the baht’s movement,” he said.

His comments came after the baht passed the Bt31 to the dollar mark to rest at its strongest point of Bt30.82 before closing at Bt30.95 on Thursday closing.

The Bank of Thailand (BOT), however, is saying the baht is moving in line with regional currencies.

“As of June 11, the baht has risen 2.71 per cent against the US dollar since the end of May,” assistant BOT governor Chantawan Sutcharitkul said, pointing out that the baht is the third strongest currency in the region after Indonesia’s rupiah and South Korea’s won.

The actual reason for Asian currencies rising against the greenback is that the US currency is weakening, she said.

Also, capital is flowing back into Thailand as investors who previously moved money out to invest overseas are now bringing the money back, while foreign investors have returned to the equity and Thai bond markets, but their net buys are not that much, she said.

She also warned of exchange rate volatility due to uncertainty in the global economy, financial markets and Thai economy. Businesses that have engaged in international trade have to regularly hedge their risks where the exchange rate is concerned.

She added that importers and exporters should not rely solely on the dollar when quoting a price for their goods and services, they should also use other currencies, especially when trading within the region.

Naris Sathaphondecha, senior director at TMB Analytics, said the baht rose on Thursday after the US Federal Reserve predicted slow recovery saying it may take two to three years and signalled that it was maintaining low key policy rates until 2022.

Also, global financial markets have been flooded by liquidity injected by central banks in Japan, US and Europe. Besides, money is flowing into Thailand as the economy is showing signs of improvement as the government is easing the Covid-19 lockdown measures.

Since early June, foreign investors have made net purchases of Thai equities and bonds worth Bt6.5 billion and Bt23 billion respectively, he said, adding that the dollar’s weakening was also contributing to the baht’s rise. 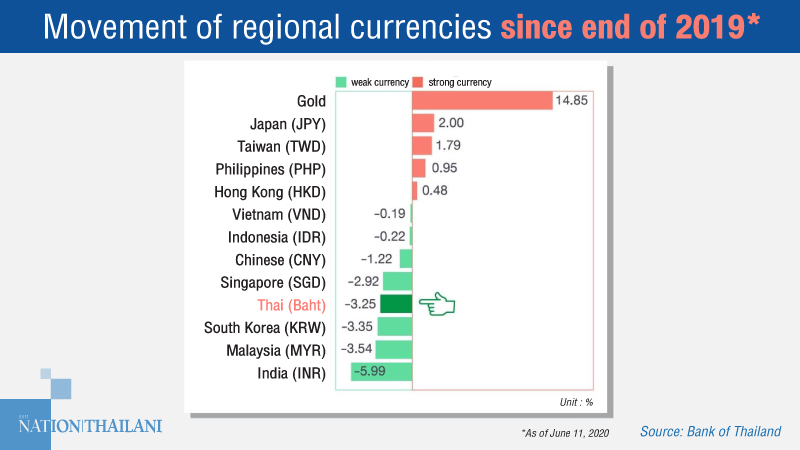 “The dollar over the past three days fell by 0.85 per cent, but the baht rose by 1.6 per cent. The baht was the strongest in the region followed by the Japanese yen, which rose 1.4 per cent, and the South Korean won, which rose 0.68 per cent in the same period,” he said.

The baht may stay within the Bt30.5 and Bt31 range and is likely to rise until the end of this month.

However, it may fall to Bt31.5 to a dollar in the third quarter in line with economic fundamentals. The current account is expected to be at a deficit of 3 to 4 per cent of the GDP, reversing from the usual 6 to 8 per cent surplus to the GDP in recent years.

The government’s efforts to curb the spread of Covid-19 has demonstrated an outstanding performance in relation to neighbouring countries, which has also pushed the baht up. He expects the central bank to introduce extra measures to curb the baht’s rise and the Finance Ministry to launch additional stimulus packages.

Jitipol Puksamatanan, chief of market strategy at SCB Securities, said the baht rose on Thursday because exporters sold off their dollars out of panic over the baht’s fast appreciation. Early this year, most companies had estimated one dollar to cost Bt30, so selling their dollars now, they will only be making a small profit, not a loss from the exchange rate, he added.